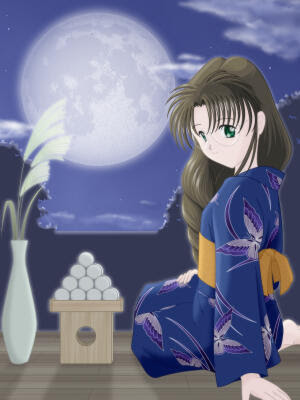 Tsukimi-zake is one of the optional hands in Koi-Koi.  I say optional as some don't play it as it is a fairly easy hand (like Hanami-zake) to get and is worth an easy 5 points. 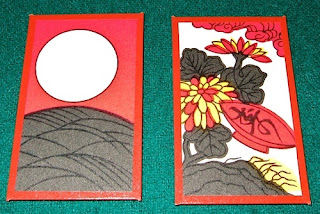 Tsukimi refers to the Japanese tradition of holding parties to view the harvest moon. The custom is thought to have originated with Japanese aristocrats during the Heian period, who would gather to recite poetry under the full moon of the eighth month of the lunisolar calendar, known as the 'Mid-Autumn Moon'. Since ancient times, Japanese people have described the eighth lunisolar month (corresponding to September on the contemporary Gregorian calendar) as the best time for looking at the moon, since the relative positions of the earth, sun, and moon cause the moon to appear especially bright. 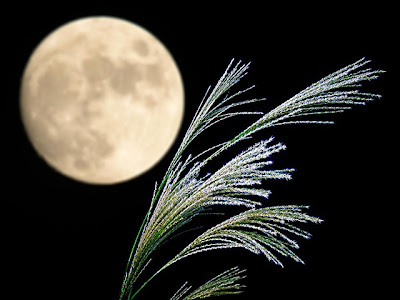 On the evening of the full moon, it is traditional to gather in a place where the moon can be seen clearly, decorate the scene with Japanese pampas grass and to serve white rice dumplings (known as Tsukimi dango), taro, edamame, chestnuts and other seasonal foods, plus sake as offerings to the moon in order to pray for an abundant harvest. These dishes are known collectively as Tsukimi dishes (月見料理 tsukimi ryōri). Due to the ubiquity of sweet potato or taro among these dishes, the tradition is known as Imomeigetsu (芋名) or 'Potato harvest moon' in some parts of Japan. 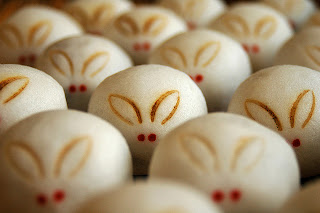 From 862 until 1683, the Japanese calendar was arranged so that the full moon fell on the 13th day of each month. In 1684, however, the calendar was altered so that the new moon fell on the first day of each month, moving the full moon two days later, to the 15th day of the month. While some people in Edo (present-day Tokyo) shifted their Tsukimi activities to the 15th day of the month, others continued to observe the festival on the 13th day. Furthermore, there were various regional observances in some parts of Japan on the 17th day of the month, as well as Buddhist observances on the 23rd or the 26th day, all of which were used as pretexts for often late-night parties during the autumn throughout the Edo period. This custom was brought to a swift end during the Meiji period.


Festivals dedicated to the moon have a long history in Japan. During the Heian period elements of the Chinese Mid-Autumn Festival were introduced to Japan. Members of the aristocratic class would hold moon-viewing events aboard boats in order to view the moon's reflection on the surface of the water. The writing of tanka poetry was also an element of such mid-autumn moon viewing festivities. 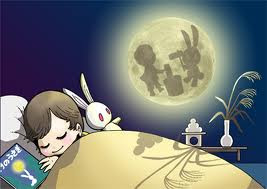 There is a story related to this festival - the story of the Jade Rabbit.  This Buddhist story tells that on a day of Uposatha (day of observance), an old man asked for food from a Monkey, an Otter, a Jackal and a Rabbit. The Monkey collected fruits and offered them to the old man, the Otter brought him a fish and the Jackal a Lizard. The Rabbit didn’t have anything to bring, because the herbs constituting his food weren’t good for humans.

The rabbit decided to offer his own body and jumped into  a fire but surprisingly his body did not burn because the old man was Sakra (King of Heaven). For people to remember the rabbit’s sacrifice, the old man drew the rabbit’s image over the moon. 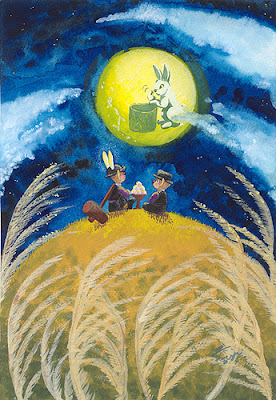