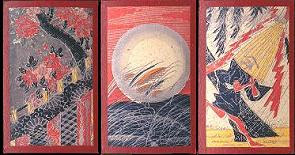 This special edition produced by Ôishi, is a replica of an original deck dating back to the Meiji era (1864-1912), that one century earlier had been commissioned to the same manufacturer by Itô Hirofumi (1841-1909), the first Japanese Prime Minister. He was a lover of figurative art of his own country and had a particular interest for the typical flower card illustrations.
During the 19th century despite some graphic details that were still partly subject to changes, the design of the local cards had gradually reached a certain stability and the basic elements had become standard: a Crane on the first card of Pine, a Bush Warbler on the same card of Plum, the Curtain on Cherry and so on (including the ones with red and blue Ribbons). The edition that Hirofumi had made by Ôishi could be described today as 'luxury'. The maker kept one copy for himself and from this specimen in 1991, a faithful replica was obtained called Sôridaijin no Hana-karuta (Prime Minister's Flower cards) in honour of the important client.
A curious fact concerning the Prime Minister is that during a state visit in the United States, he became aware that a tax was imposed on playing card decks. Up to those days this had only been a Western custom. When he returned home in order to improve the country's financial situation (which had been seriously affected by the war against Russia in 1904-5), he introduced the tax in Japan but within a few years this caused a dramatic decrease of playing card sales and several makers even had to close down their workshops. 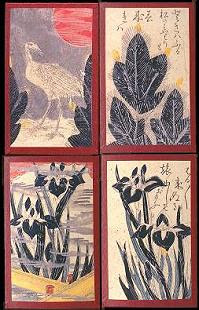 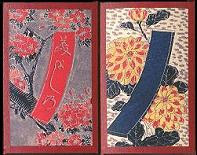