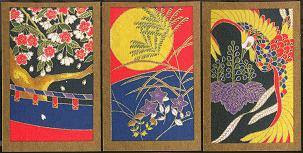 This colourful Hanafuda edition by Windmill, named Kin-Botan (Golden Peony) is a faithful replica of another original deck that once belonged to Itô Hirofumi.

The deck is itself more or less double the size of traditional Hanafuda. Each subject is printed on brown cardstock of  'ordinary' thickness, i.e. similar to the one used for Western cards.

The Hikari, Tane and Tanzaku cards are printed in very bright colours, while the Kasu cards are yellow with a particular background texture.  Only the Kasu card of Yanagi (Willow) maintains its traditional red colour.

These cards are printed following a special technique called Kyôto yuuzen, which is the one traditionally used in Kyoto for printing textures on kimono garments. In most of the cards, the main subject is enriched with details in gold paint, giving the reason for the name of the deck (which is featured on the extra card). 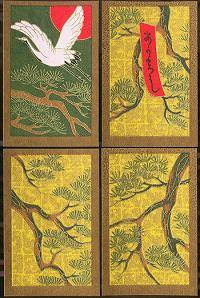 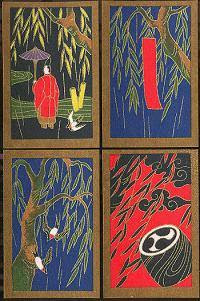 The extra card with the name of the deck