Takumi Itô is a contemporary artist active since the mid 1940's. In 2004 she created a series of 48 woodblock prints for the Hanafuda subjects, which she entitled after an old name that the Japanese used to refer to their own homeland, Shikishima, roughly meaning 'the lovely island'. The illustrations underline the environmental details making them more eye-catching than in standard editions yet without turning them glamorous, thanks to the choice of sober colours and the naive finish of the woodblock technique.

This deck comes with two extra cards, one with a small Oni or Demon, the other featuring a further Ribbon whose text is the name of the firm that released the Shikishima edition (Okuno Karuta). 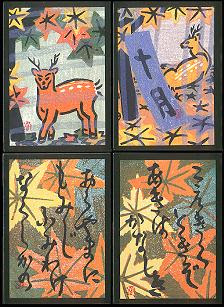 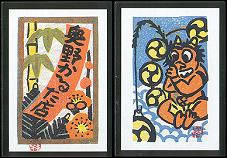