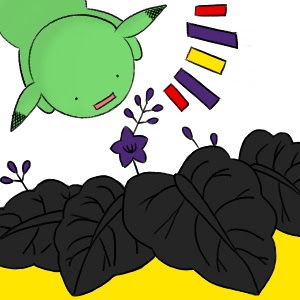 Muu-Chan from the Japanese manga 'Tactics' (タクティクス) posing here as a Chinese Phoenix.

For those that don't know, Muu-chan (むーちゃん,) is a small, green Youkai who is married to Sugino and only says 'Muu'. Muu-chan has the ability to vacuum up demons and spells using its mouth.

'Hana to Doto' by Sean D'Anconia 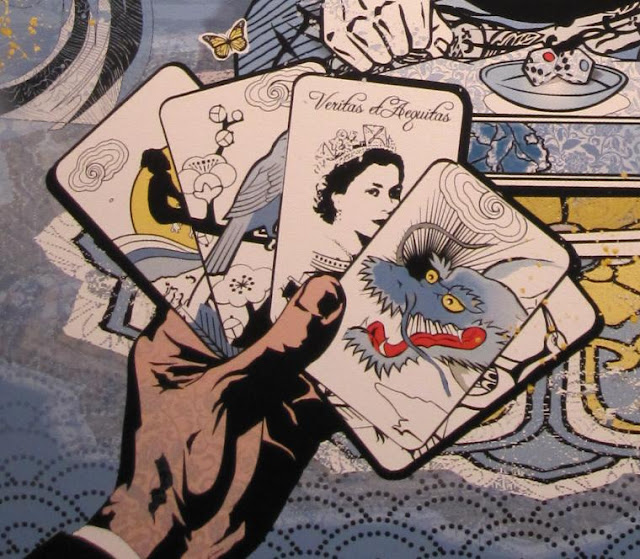 This is actually a section of a piece by Sean D'Anconia, best described in his words...

'These other cards are original – again a combination of British and Japanese elements, some borrowed from Hanafuda, others like the dragon are from a vintage matchbox collection that I recreated (very time consuming)! The words read, 'Veritas and Aequitas' (Truth and Justice)'. 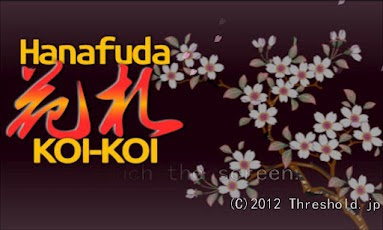 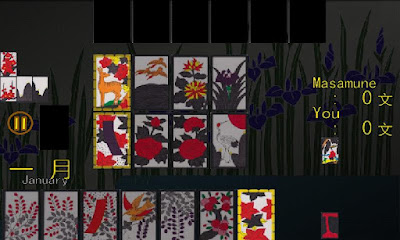 This has to be the best free Android app on the market for Koi-Koi.  It has been updated a few times since it was launched (as for instance at one point it erroneously included the 'Rain-man' for the Yaku of Sanko and Shiko).

There are six different 'Samurai' to defeat and although I'm a veteran Koi-Koi player it did seem a little too easy to clear all of the stages.  Still, it is free and good enough for a bit of Koi-Koi on the go!

Posted by duarcain at 22:21 No comments: 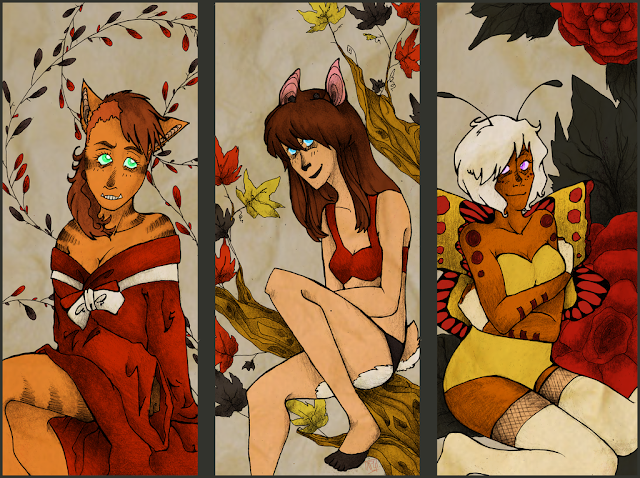 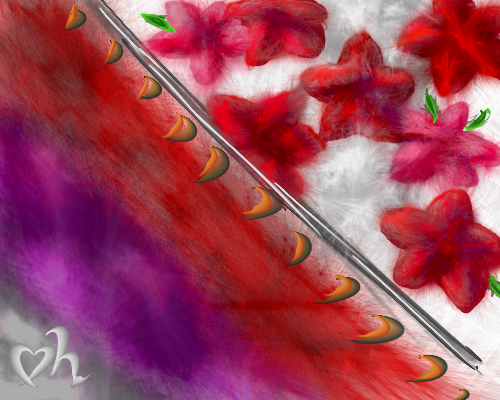 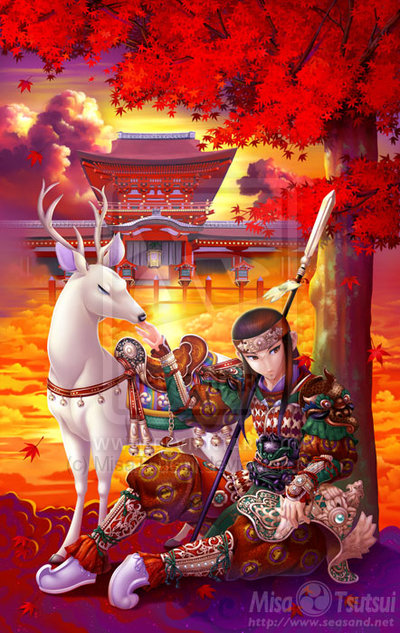 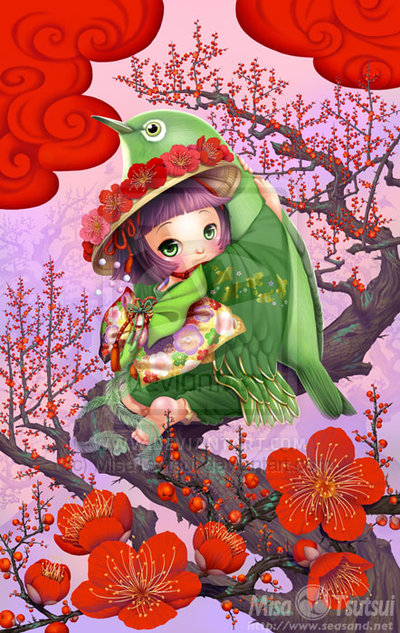 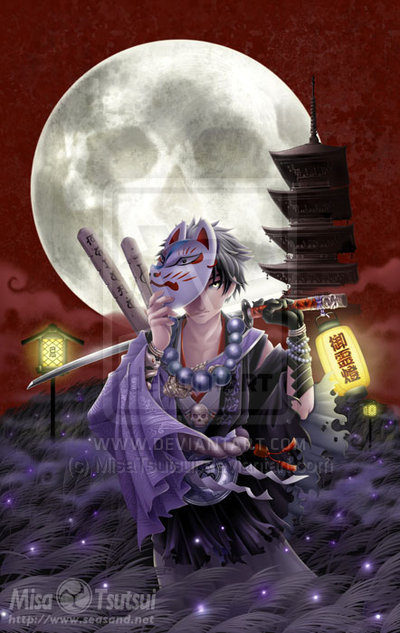 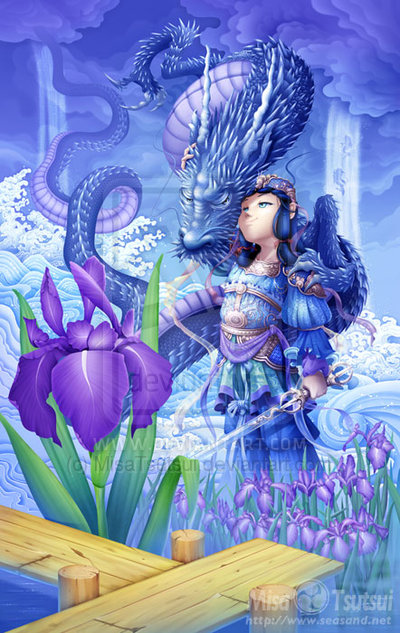 More work from Misa Tsutsui. Very well drawn and detailed, just a pity about the watermarks! :( 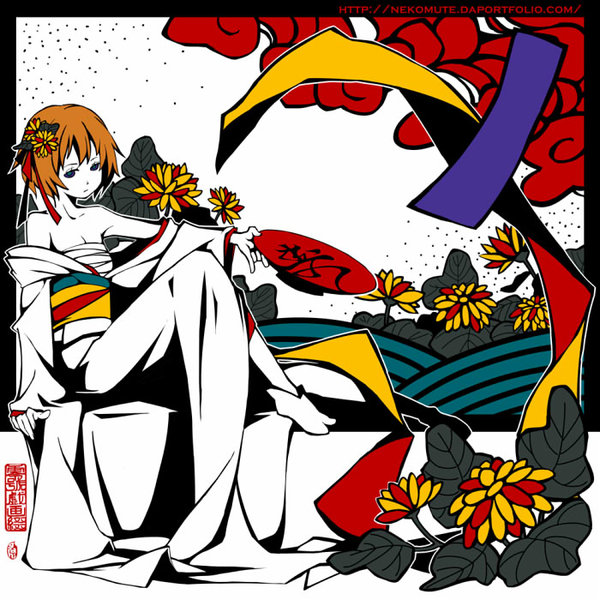 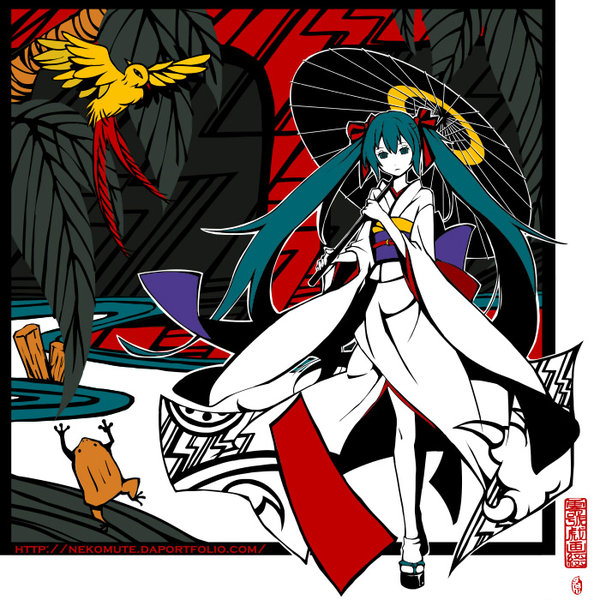 Posted by duarcain at 21:21 No comments: 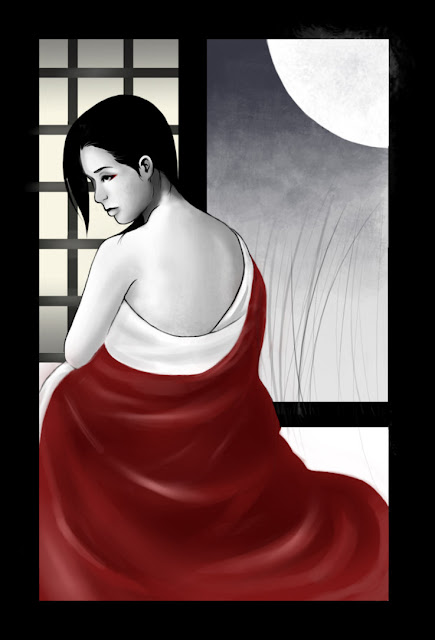 Has she been rudely disturbed during some moon-viewing?

I mentioned in a earlier post that my friend and I played a few sessions of Koi-Koi whilst en vacance in Korea and Japan.  Now, even though there was no prize or shiny trophy to be had we still kept score.  To quote Vince Lombardi 'If it doesn't matter who wins or loses, then why do they keep score'?

So here are the round by round scores with a little commentary on what I can recollect! My score is listed first.

All games were played with Korean decks and accompanied by cans of various brands of domestic beer.  *Asahi, Suntory, Cass, Kirin, Sapporo.

A very low scoring game.  We played for about a hour (this became the agreed time limit for our games).  Pretty much Kasu, Tane and Tanzaku all the way.

Fairly low scoring once again, the cards did not fall favourably for either player.

Nip and tuck all the way but somehow I just held on! Phew!

My first loss of the series and to this date (not that I keep an excel spreadsheet or anything) my biggest loss EVER against this particular friend.  I don't think I've seen so many Ame-Shiko's and Tsukimi/Hanami-zake's in one sitting.  He could do no wrong and I was never in it.  A late flurry from me made the score look a little more respectable.  I knew it could have been a lot worse.

What a difference a day makes - just 24 hours!  The series moved on to Yokohama and I didn't have to wait long for revenge.  It was practically a mirror image of the night before. A tsukimi-zake took my friend into double figures at the death. Sugoi as they say in Japan.  I slept very well that night.

The high of the night before didn't last long, my friend took the trauma of the previous round well by restricting me to just 13 points, a very tense but enthralling game.  Honours (but not scores) even in Yokohama.

Tokyo isn't a happy hunting ground for me.  I'd previously played my friend at 9-ball and 8-ball on a couple of occasions and didn't do very well and as fate would have it the same thing would happen to me at Koi-Koi.  This ended up being the final round - much to my friends annoyance as he was more than aware he was down in points but like I told him it was just a few friendly games of cards.

Posted by duarcain at 21:21 No comments: 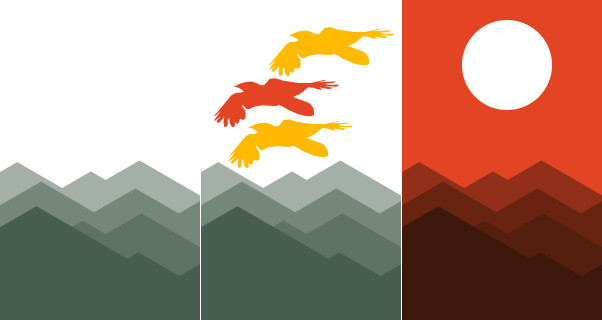 Three cards of the Susuki suit.  Those birds look like Hawks or Eagles flying over the Blue Ridge Mountains. 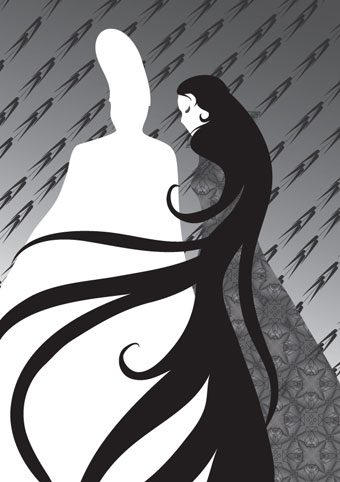 
The above is a teaser of a stunning Hanafuda deck design.  Superb!

A very feminine looking deck in monochrome with splashes of colour.  The use of the female form compliments the flowers and the flowing look and feel of the deck.

http://www.amadori.org/html_and_images/html/framesets/3frm_illust_frameset.html
(then click on 'Hanafuda' on the left hand side).
Posted by duarcain at 13:45 No comments:

No words are neccessary but I can't really see Yoda drinking Sake. 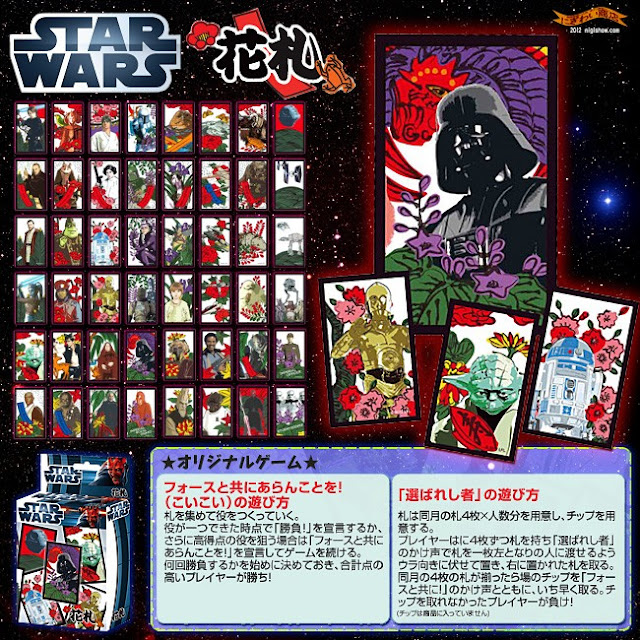 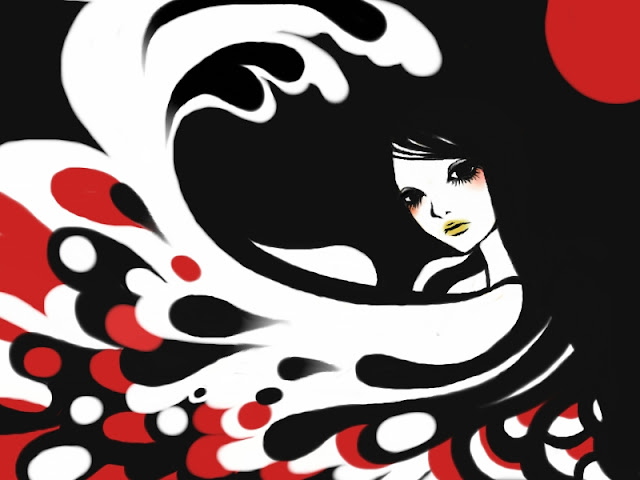 A great re-imaging of the Crane card!

Posted by duarcain at 23:30 No comments:

I like this panoramic vision of the 'Matsu' suit.  I'd prefer the Sun to be red though as the Japanese always depict the sun as red in drawings &c. Artistic licence comes first however!

Posted by duarcain at 23:21 No comments: 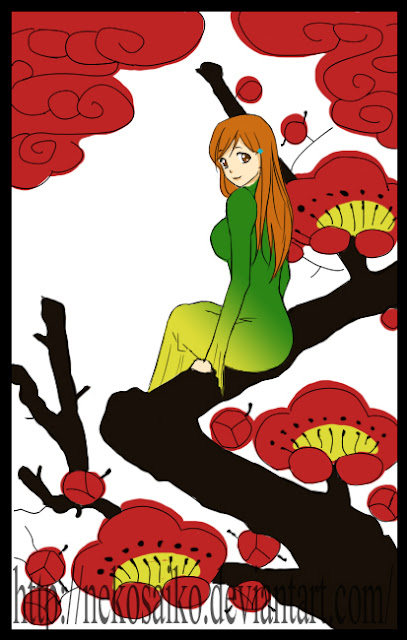 Stunning image of a Cherry tree in Shinjuku Garden, Tokyo. 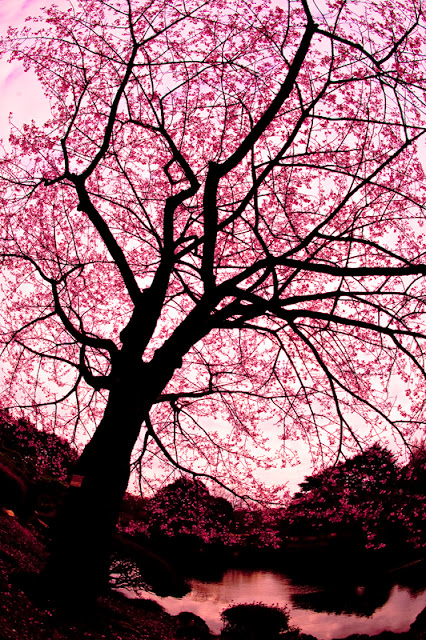 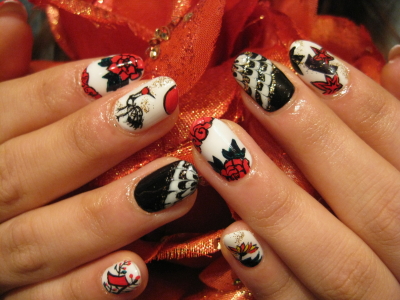 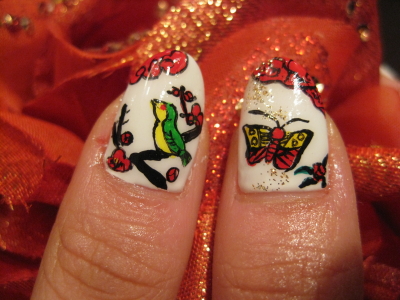 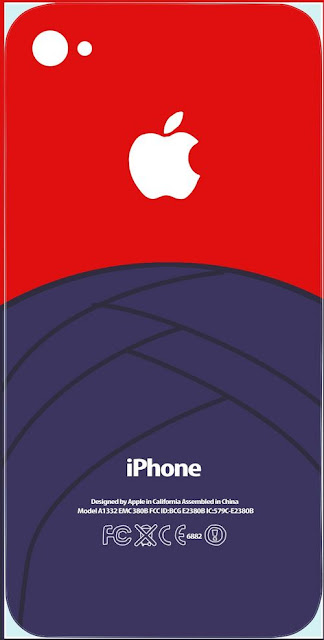 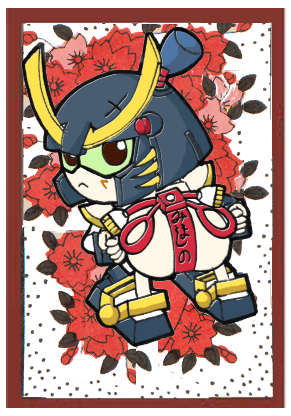 Posted by duarcain at 20:02 No comments:

Getting Arty on my Mobile!

It has been over a month since my last post as I've been busy doing other stuff but rest assured I will be adding more posts in the near future.  In the meantime here is a little 'arty' picture I took with my mobile phone of my Nintendo Hanafuda!

Which card did I play first? 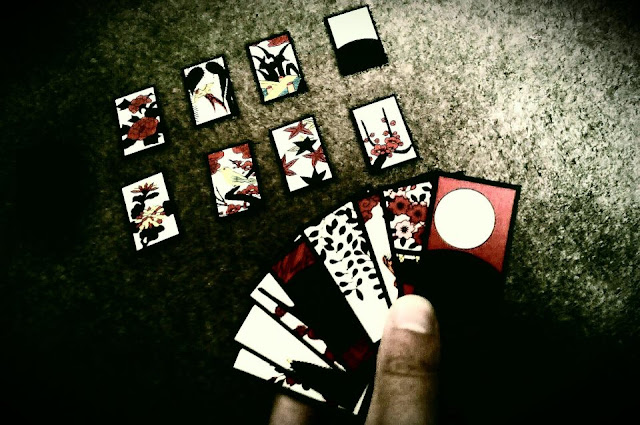 Posted by duarcain at 19:56 No comments: