Most Hanafuda games are played between two opponents. In 2000, manufacturer Matsui Tengudô issued a four-player version, named Ryuu-Ko ('Dragon-Tiger') after the Tane subjects of two extra suits found in the deck. The edition is also referred to as Nana-nana-bana ('Seven-seven flower cards'), which mimics Hachi-Hachi ('Eight-Eight'), the traditional game played with standard Hanafuda decks.

Despite being a novelty, all subjects closely follow  the classic Hanafuda design, including the two suits created for this purpose.  The extra suits are 'Hasu' (Lotus) also described as 'Heaven month', whose Tane card features the Dragon, and 'Sasa' or 'Take' (Bamboo) also described as "Earth month", whose tane card features the tiger. Both suits also have a red Tanzaku (Ribbon) card. 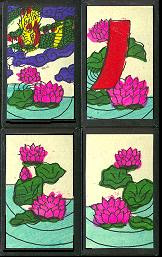 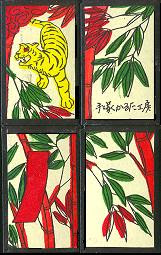 
The other suits and subjects of the deck are the standard ones (see picture below), although as a reminiscence of the early Meiji period editions (19th century), verses of tanka poems are featured on the kasu cards of Pine, Plum, Wisteria, Iris, Eulalia and Maple families, a detail also found in the Echigobana regional pattern. 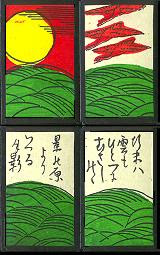