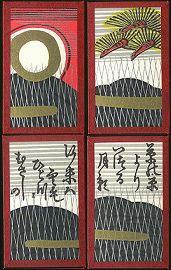 Echigo is a former province of Japan that now forms the majority of Niigata prefecture. The main features of this pattern (which are modelled on pre 1868 decks) are an extensive use of silver and gold details over the main illustrations and the presence of short poems (Tanka) added to Kasu cards belonging to the Matsu (Pine), Ume (Plum), Fuji (Wisteria), Ayame (Iris), Susuki (Pampas grass) and Momiji (Maple) suits.

The Tanka are divided into two halves, featured on each of the two Kasu cards. This graphic element, which has nothing to do with the gambling game was probably conceived as an attempt of disguising Hanafuda cards as Uta Karuta or 'Poet Cards' since the latter were not prohibited. 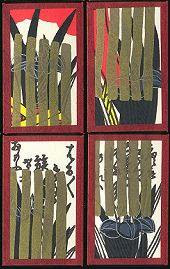 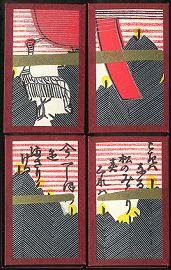