A Case of Mistaken Identity?

Lets take a closer look at the bird in the Ume (Plum) suit. 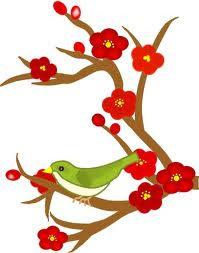 Many Japanese people mistake Japanese White-Eye (目白 Mejiro) for Japanese Bush Warbler (鶯 Uguisu). ﻿There has been a confusion between the two birds among the Japanese people and there are a couple of reasons for that. For one thing, 梅に鶯, Ume blossom and Japanese Bush Warbler, is one of certain traditional pairings of flowers and birds/animals like 松に鶴/Pine and Crane (an auspicious pair), 藤に不如帰/Wisteria and Cuckoo, 紅葉に鹿/Maple and Deer and so on. 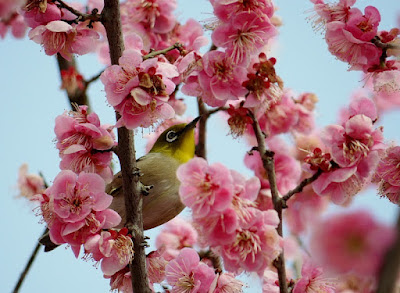 Japanese White-Eye in a Plum tree 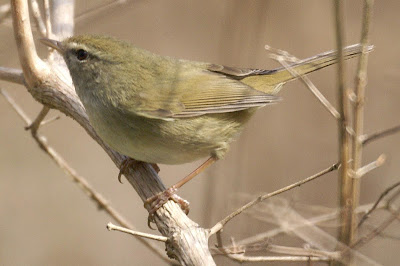 Japanese Bush Warblers are drab olive green. They are cautious and usually remain deep in the shadow of foliage in the grove.


Ume blossoms are thought to be a harbinger of spring as they bloom much earlier than other spring plants when air is still cold. The cry of the male Japanese Bush Warbler also heralds the arrival of spring with their distinctive chirps, Ho-Hokekyo, which is a pan to 法-法華経, the Lotus Sutra of Buddhism. People hear the chirping of a Japanese Bush Warbler from nowhere and see the appearance of Japanese White-Eye among Ume blossoms, which caused misunderstanding and confusion about the two birds.

Bush Warblers and Ume blossoms have been featured in haiku as seasonal words of spring and often the motif of paintings and other arts.