The Kintokibana (officially Awabana) is a pattern born in the old province of Awa (now Tokushima prefecture, Shikoku). The name Kintoki refers to the legendary person featured on the extra card. This pattern spread to the north to Honshu in present day Okayama prefecture.

The most outstanding feature of the pattern is the presence of numerals, (except on the Kiri suit) referring to the twelve families or suits. They are found on almost every Kasu (Junk) card, in the shape of an encircled Japanese-Chinese character.

Only two Tane cards from the suits of Fuji (Wisteria) and Yanagi (Willow) bear the encircled number, while the latter is not featured in other subjects, among which are all five Kô cards. 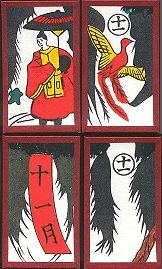 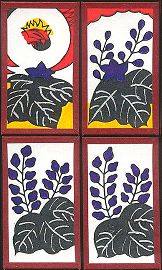 Finally, the extra subject of the Kintoki deck after which this pattern was renamed: the Kintarô card.