Here we have another free Koi-Koi game on Android.  The graphics are pretty basic with a simple user interface (even if most of it is in Japanese) but the cards are rendered nicely (well they look good on my Nexus 7).  I saw one reviewer on Google Play moan about how 'Hanami-zake' (Cherry Blossom Viewing) and 'Tsukimi-zake' (Moon Viewing) are not included. However, those two hands are there but you need to turn them on (not everyone likes those two hands as they are fairly easy to get you see). It only takes a little bit of messing around on the mainly Japanese language menu screen and then you're good to go. Even Nintendo's official rules state that these two hands can be 'omitted'. 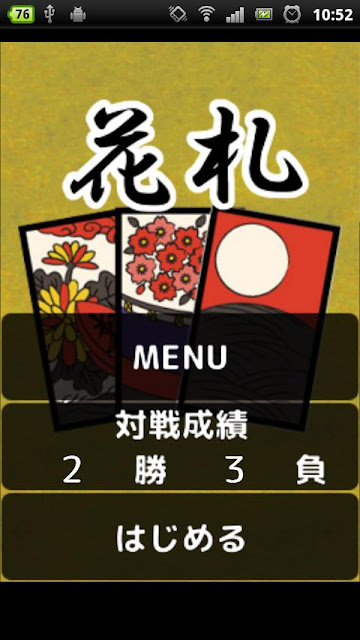 The winner is the first to 30 points in this instance and you take alternate turns in being the 'Oya' or Dealer (literally 'Parent').  The latter I am unused to, as I always play the rule that if you win a round then you become the Dealer (or stay as the Dealer). Another thing is that no multipliers are used, so if you make a yaku that is 9 points, then that is exactly what you get. 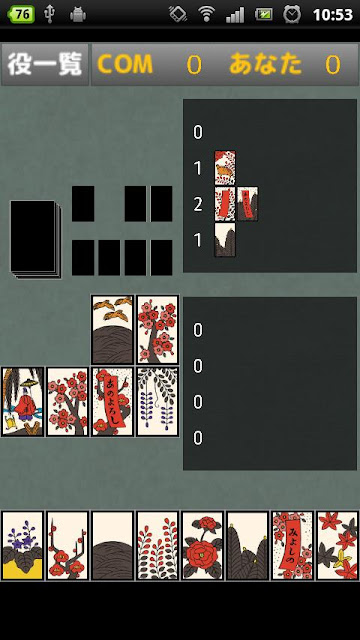 Touching the Japanese script (near the top left of the screen above) brings up a table of the scoring hands (yaku) where 'Hanami-zake' and 'Tsukimi-zake' will be 'greyed-out' unless they have been turned on.  The AI is quite challenging as so far I've won 3 times and lost 5 times. The game still gets a big 'thumb's up' from me though!
﻿
花札こいこい (Hanafuda Koi-Koi) by n225.zero is available on Google Play...
https://play.google.com/store/apps/details?id=com.n225zero.koikoi