December is represented by the ‘Kiri’ (Paulownia) plant. The Kiri is the official symbol of the Prime Minister of Japan and of the democratically elected system of government. This was the Mon of the Minamoto family, the originators of the Shogun title. ‘Minamoto’ was an honorary surname given to members of the Imperial family not in line for the throne. The name Minamoto is also sometimes referred to as ‘Genji’. The famous novel ‘The Tale of Genji’ is about the Minamoto. The Mon with three Paulownia leaves on the bottom and the blossoms on top numbering 5-7-5, was awarded by the Heian Emperor to Minamoto no Yoshiie (1039 - 1106). Lesser members of the Minamoto clan had a similar Mon with the flowers on top numbering 3-5-3. One of the requirements for becoming Shogun was to be from the Minamoto. In other words, the Shogun had to be a blood relative of the Emperor. 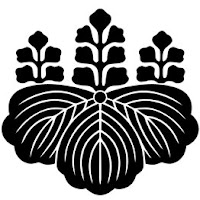 Tokugawa Ieyasu (1543 - 1616) was the last Shogun to rule Japan. The Tokugawa government held all the political and military power during the Edo period. The Emperor was just a figurehead in the capital of Kyoto. All important decisions were made in Edo. Tokugawa Ieyasu became Shogun by forging his ancestry to show that he was descended from the Minamoto. The Tokugawa government was always afraid of rebellion because of this. After 250 years the Emperor Meiji was finally able to regain power from the Tokugawa Shogunate. 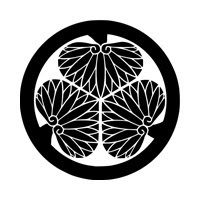 At the beginning of the Meiji period (1868-1912) the Emperor Meiji took political control away from the Tokugawa. This was the beginning of modern Japan. He moved the capital from Kyoto to Edo and renamed it Tokyo (eastern capital). He gave political power to the lords and samurai that had helped restore the power of the Emperor. The Paulownia Mon is a symbol of democratic government legitimised by the Emperor, in the tradition of the Minamoto.
Posted by duarcain at 11:27