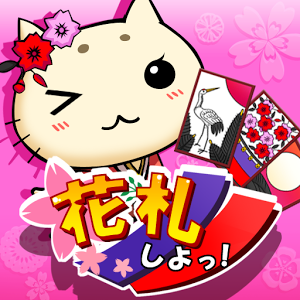 This is by far my favourite Koi-Koi app to date.  I L-O-V-E this game!  In fact, I liked this game so much, I decided to do this review! I had previously only played the 'Lite' version but an anonymous contributor to my blog recommended buying the full game and let's face it, £2.64 is cheaper than a pint of beer in most pubs these days!  Obviously this game is exclusively in Japanese (it'd be nice to have an English language version) but don't let that put you off as it only takes a little tinkering and use of an online translator to be able to competently navigate through the various options and menus! 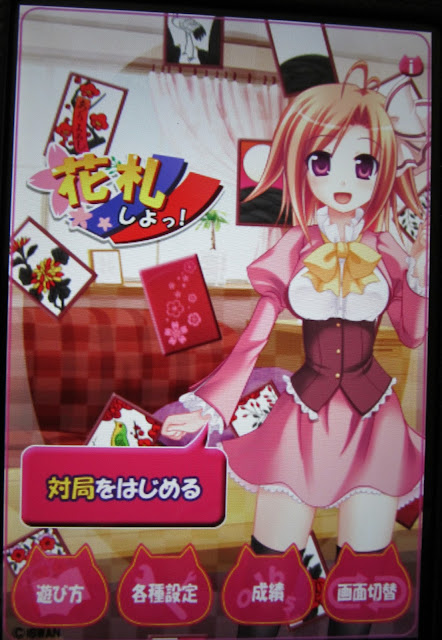 Home screen
The 'Home' screen (above) has five main options; Touching the large speech bubble takes you to the 'Game Mode' screen.  The other options underneath going from left to right are 1) Tutorial, 2) Options/Settings, 3) Statistics and 4) Theme Change (Girls, Animals &c).
Tutorial
The Tutorial is 15 screens long and not surprisingly, it is exclusively in Japanese.  When capturing cards, a blue block will appear when you are one card away from making that particular scoring hand (yaku).  A blue block will then turn pink when a scoring hand (yaku) is made. 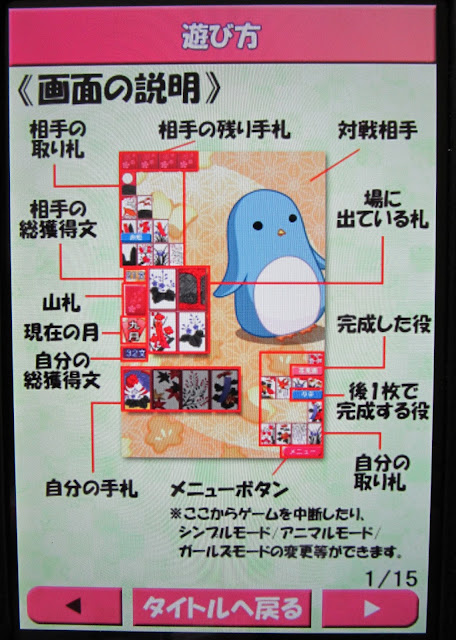 Tutorial
Game Modes
The game offers three different modes; 6-round game, 12-round game and Continuous Battle.  The latter gets you playing 6-round games against opponent after opponent until you lose.  In 'Continuous Battle' mode you start with 20pts and your opponent starts with 10pts.  The goal is to reduce your opponents score to zero. Certificates/Trophies are awarded for beating 5, 10, 20 and 30 opponents in a row and costumes and art work are also unlocked. 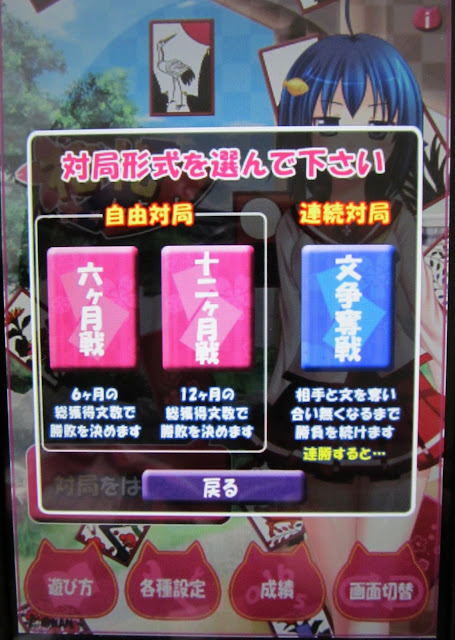 Game mode select screen
The options here are (from left to right) 6-round game, 12-round game (both in pink) and Continuous Battle (blue).  The purple 'button' takes you back to the Home screen.

Depending on your sensibilities and preferences you play either against 6 Manga/Anime-style girls or cute animals or just against a Japanese still life background (of course you can cycle through these at any time).  I play against the 'girls', my favourite being the girl with the brown hair, red skirt and blue blazer. ;)

Selecting either a 6-round game or a 12-round game will take you to this screen: 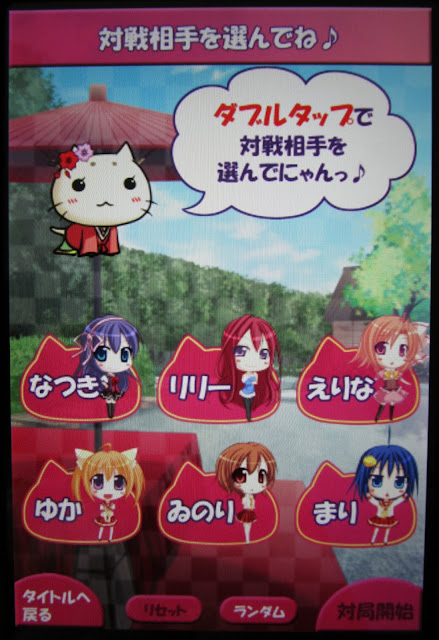 Double tap the relevant girl you want to play. When you do this the 'button' on the bottom right will become 'active'.  Touch that 'button' to start play. Alternatively touching the pink  'button' second from right will randomly select an opponent. 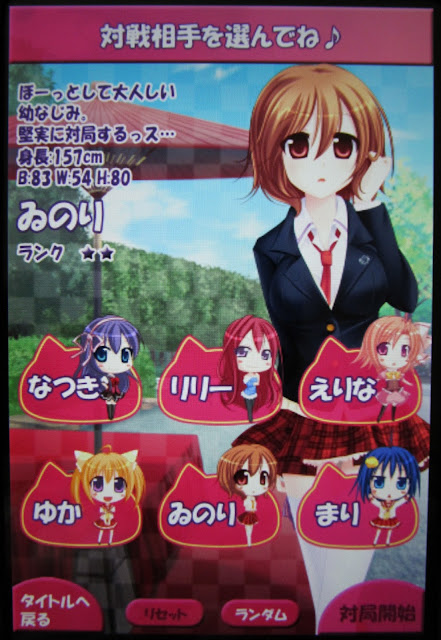 She is my favourite.

Scroll down further for the general gameplay section...

Statistics
The stats section is fairly self explanatory, the first screen shows you your win/loss records for all three game modes.  As you can see I haven't played any 12-round games yet. The second screen details how many times you have made a certain hand (yaku) as well as other things. 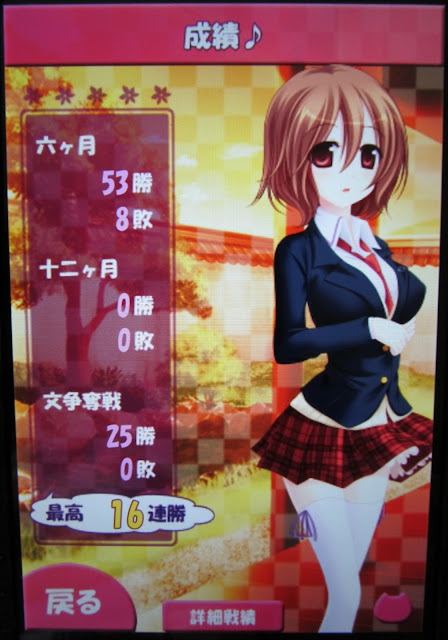 Statistics - Screen 1
The '16' in the speech bubble isn't the girls age, it was my best winning streak (update: It is now 51) in 'Continuous Battle' mode.  I played that mode twice, so I expected to see a '2' appear in the loss section rather than '0'! A 'bug' in the software maybe?!  The Cat's head icon will take you to the gallery of  unlocked art work.  Touching the pink 'button' at the middle bottom of the screen takes you to the second screen. 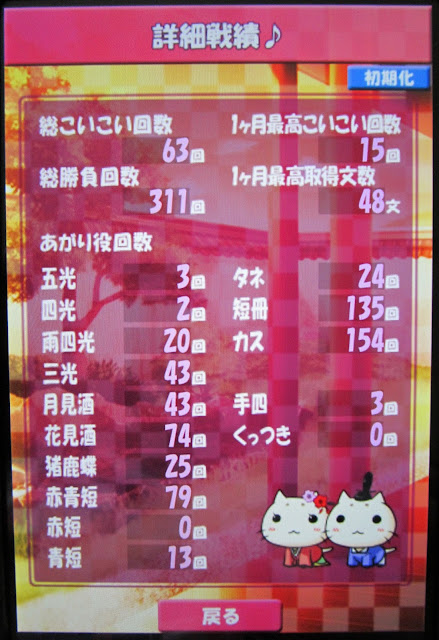 Statistics - Screen 2
Most of the second screen details how many times you  have made a certain scoring hand (yaku) but I have an issue around the 'Aka-tan' and 'Ao-tan' counts.  The row third from bottom (in the first column)  groups instances of  making 'Aka-tan' and 'Ao-tan' together when 'Tan' has been made as well. In one word - why? I'm not convinced that the game compiles those hands correctly either.
The scoring hands (yaku) are listed as follows:
Left column, from top to bottom:
Right column, from top to bottom:
Dealt Hands:
Options/Settings
The devil is in the detail and there are plenty of gameplay options to set/unset.  This is where (unless you can read Japanese or you have done your homework) things can get quite tricky.  Let me help you out here... 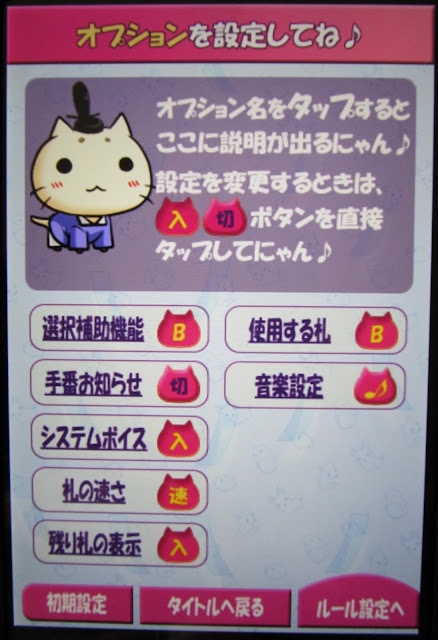 Left column, from top to bottom:

1) Three options for 'greying-out' cards. I use option 'B', this is where the cards in your hand are 'greyed-out' if they do not match any in the field of play.

2) Option for a sound effect to sound when it is your turn.  I say 'don't bother', as it is a very annoying 'Meow'.

5) Option to display the remaining cards of the opponents hand after the round has finished.

Right column, from top to bottom:

6) Option to use 'traditional' (Hachihachibana pattern) or 'cartoony' style Hanafuda. 'B' = the 'cartoony' cards (which in my opinion is a better fit with the overall art style of the game).

This section is quite straightforward. It pretty much allows you to make your own 'house rules'.  Play Koi-Koi your way! 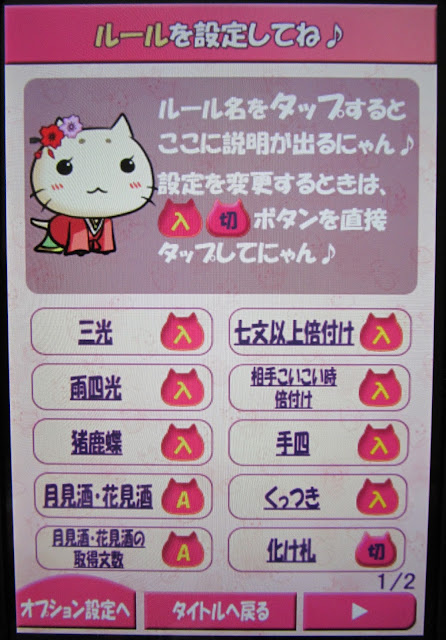 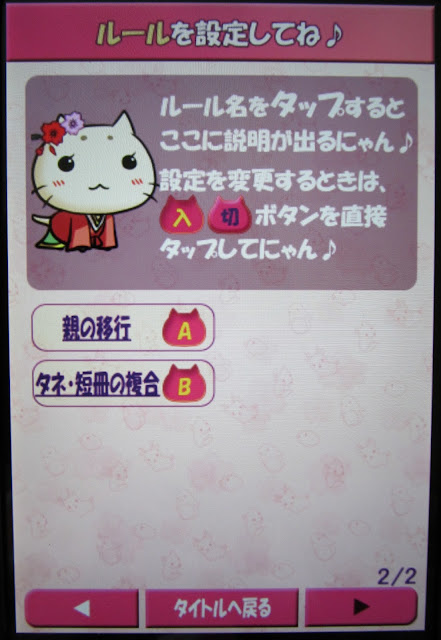 Screen 2 , Left column, from top to bottom:
11) Winner stays as Dealer ('A') or Alternate Dealer ('B').
12) With/without points for additional cards to scoring hands. 'A' adds 1pt for each additional card captured for certain scoring hands. 'B' does not allow for this. I set this to 'B' as setting it to 'A' messes up the Moon Viewing and Blossom Viewing 'On' rule. It must be a 'bug' in the software as it shouldn't happen!

Here is a more detailed example...

Aka-tan plus two other scroll cards:

First, we need to decide who the 'Oya' (Dealer) will be.  So pick a card, any card. The earliest card decides who goes first, e.g. February beats April (or like the Japanese would say Second Month beats Fourth Month). 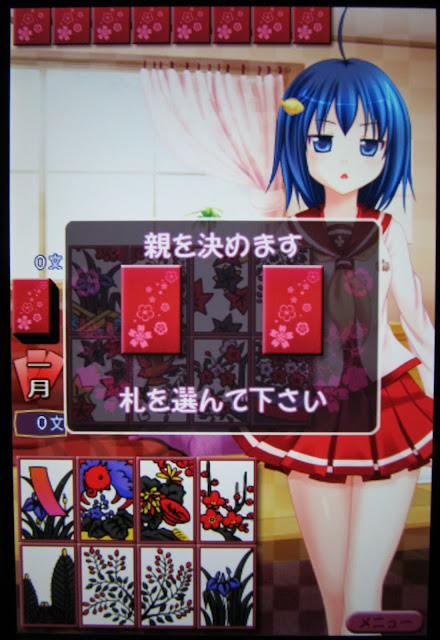 Now we get down to the business of matching cards to make those scoring hands... 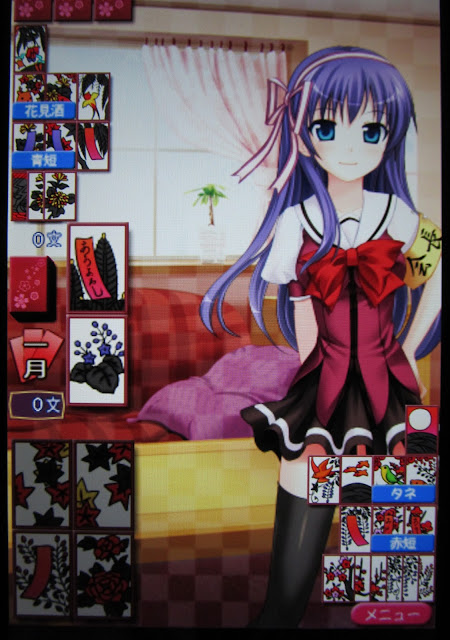 The cards you capture appear in the bottom right of the screen.  Naturally, they are arranged by their type; Lights, Animals, Scrolls and Junk.  Tapping either your own or your opponents captured cards will enlarge them.  Tap them again to return them to their original size.

When you make a scoring hand, this appears (unless you have just played the final card in your hand): 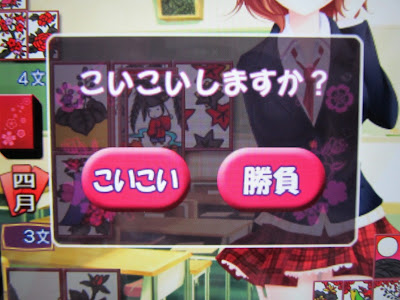 Do you 'Carry on' (Koi-Koi - こいこい)? or do you 'Stop' (Shōbu - 勝負) and take the points?  The choice is yours.  Notice how all the girls in the previous three screens are different?  I need to 'fire' the person in charge of 'continuity'! ;) 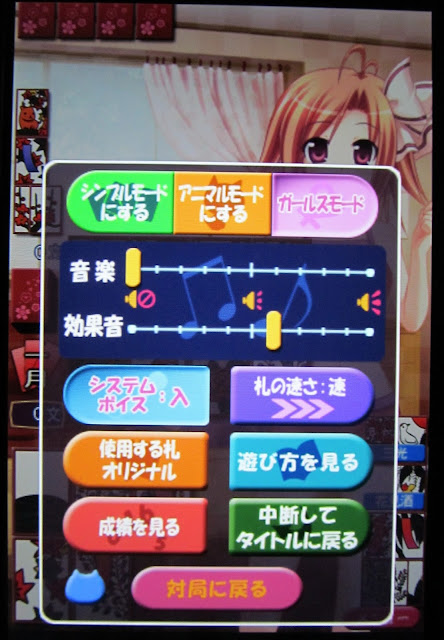 Tapping the little button in the bottom right corner of the main game screen brings up the in-game options.

The little blue Cat's head icon changes the girls' outfits.  This feature has to be unlocked by defeating 20 and 30 opponents (the latter unlocks Kimono outfits) in  'Continuous Battle' mode though.

The rest of the options should be easy for you to decipher, from changing the theme, volume, game speed and the deck design.  Touching the pink 'button' at the bottom closes the options and takes you back to the game screen.
Another cool feature of this game are the little animations that appear when you make a scoring hand (yaku).  Here are two of them: 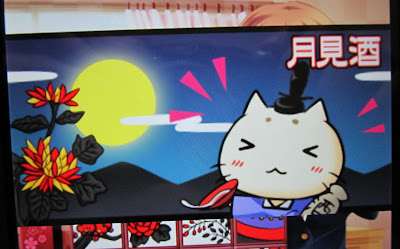 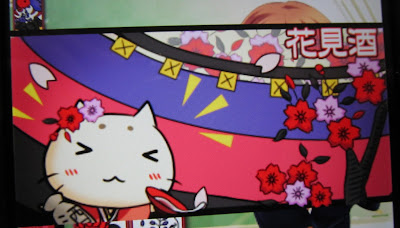 Blossom Viewing - Hanami-zake
Finally, when you win, you will see this... 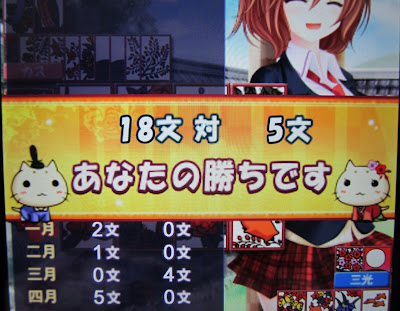 When you lose, you will see this... 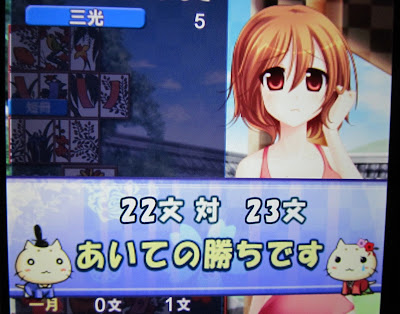 You'd think she'd be happy (unlike the Cats)! That was a close one. Oh well.

The game is available on iTunes and Google Play.  There is also a free 'Lite' version of the game.  This is the best looking Koi-Koi app I have seen and played yet. Give it a go! 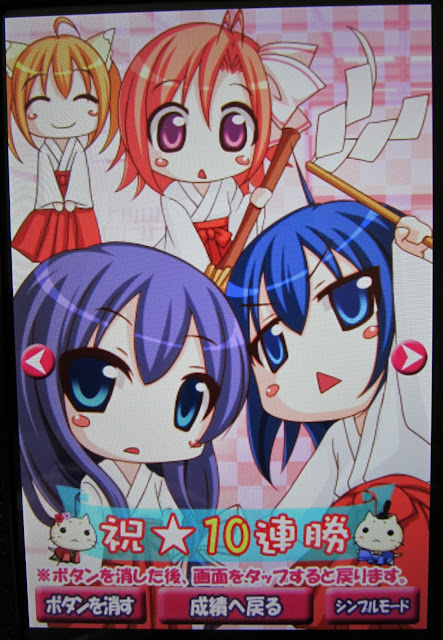 Girls in Shrine Maiden outfits! One of the rewards for defeating 10 opponents in a row in 'Continuous Battle' mode.